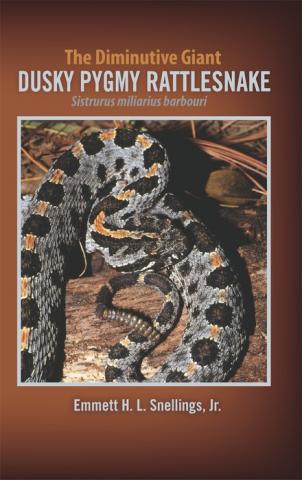 The Diminutive Dusky Pygmy Rattlesnake has been around for eons and is one of three species of pygmy rattlesnakes. Though they have been on earth for such a long time, until recent years they have not commanded muchinterest either among many herpetologists or most of the public in general. But the last twenty years or so have seen a surge in the study of their uniqueness. As with most animals, they vary (sometimes greatly) in their temperament, coloration, and habitat. Nowadays, there are a few avocational herpetologists who have become sort of 'Cpygmy groupies, who study, collect and/or breed pygmy rattlesnakes, sometimes resulting in unusual and spectacular color patterns.

Emmett H. L. Snellings, Jr. has many years invested, both solitarily and with the scientific community, in the collection and study of this wonderfully unique member of the wild kingdom, the Dusky Pygmy Rattlesnake. He presents in this book an interesting look into their lives in nature.

This 68 page book is fully illustrated with 60 full color pictures depicting habitat and the variability of these beautiful serpents.