The Family Xenosauridae in Mexico 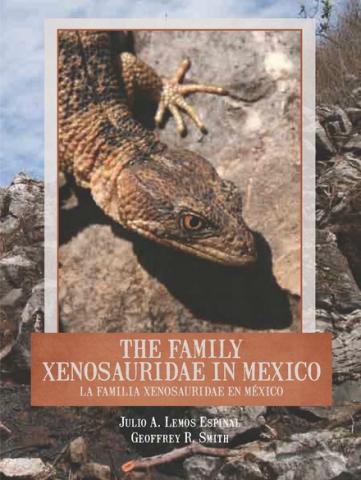 THE FAMILY XENOSAURIDAE IN MEXICO is a detailed review of the current state of knowledge of the Mexican Knob-scaled Lizards. These lizards have a limited distribution that is restricted to several isolated localities in Mexico and Guatemala.

The family is represented by a single genus (Xenosaurus) and six species. Mexico is home of the six species so far recognized for this family, as well as several isolated populations in the states of Guerrero, Hidalgo, Oaxaca, Puebla, and Querétaro, whose taxonomic status is uncertain.

This publication aims to focus attention on one of the most important lizard families, and at the same time one of the least well known. Photographs of the Mexican taxa, along with an identification key, will facilitate species recognition. The introduction discusses the current status of knowledge of the family Xenosauridae in Mexico as well as the most relevant aspects of the natural history of the Mexican Knob-scaled Lizards and compares the ecological information so far published on the taxa that comprise this family. Most of the book, after the introduction, is composed of an identification key, descriptions, and reviews of the distribution, natural history, taxonomy, nomenclatural etymology, protection status, references for each species, and an exhaustive bibliographical review of the publications directly related to the family Xenosauridae in Mexico. Additionally, this book includes three appendixes with excellent photographs of the majority of species of Mexican Knob-scaled Lizards, a gazetteer with all the localities where the species have been collected, and distribution maps for each species. The book is presented in English and Spanish, making it accessible for a larger audience.