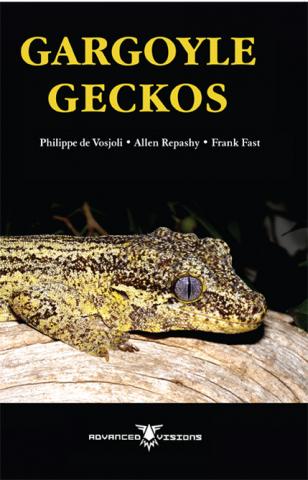 As our original work on the care of New Caledonian geckos, Rhacodactylus, was nearing being sold out, we decided that the first in the four-volume updated 600-page replacement set would focus on gargoyle geckos. The question that came to our minds was how can a species with so many great qualities still be so poorly known and under marketed? Gargoyle geckos achieve a substantial size, are relatively calm and handleable pets, are probably the easiest to maintain of all the reptiles, and come in a great variety of color and patterns as well as some variation in form. This book represents our endeavor to rectify this situation. Gargoyle geckos (Rhacodactylus auriculatus) were the first members of the genus Rhacodactylus to become available to hobbyists. Europeans first acquired them in the late 1970s. The first captive-bred offspring reached the US by the mid-80s and they were first bred in the US by Tim Tytle in 1987. The first ones imported were of the classic reticulated type with tan and brown colors. Limited availability and consequently exposure to the public repressed their potential popularity. Another factor was timing. They appeared on the herp scene at a dynamic period when a variety of bright-colored species with more obvious financial potential (Malagasy day geckos and chameleons, bearded dragons, and blue tongue skinks) became available. Then in 1995, crested geckos and other Rhacodactylusentered the market, again diverting attention away from the comparatively drab gargoyle geckos. It wasn’t until the increased availability of bold-colored orange-striped and orange-blotched gargoyle geckos in the late 90s and early 2000s that a few gecko specialists started focusing on this species. These pioneer hobbyists realized this was a lizard that could become bright orange or red, possibly the brightest orange/red lizard in the world, and they put effort into selective breeding to increase the amount of those colors. Author Allen Repashy was the first to strive toward commercial-scale production of this species, acquiring a diverse gene pool from both European and American hobbyists. An examination of his collection and others, a total of over a thousand animals, led us to conclude that the gargoyle gecko was a lizard that could also become bright pink, bright white, mostly black, or bright yellow. Its eye color could range from a bluish white to near black. It turned out that gargoyle geckos display the greatest variation in color and pattern of any lizard species, their potential for designer breeding of living art nearly unlimited. Of course, a reptile may display beautiful coloration but, like many of the snakes, remain concealed for such extended periods of time that the enjoyment of keeping and observing it becomes a very limited experience. This is not the case with gargoyle geckos. Although primarily active at night, they commonly rest exposed on branches or in foliage during the day. This feature makes them outstanding display animals in naturalistic vivariums for both hobbyists and zoological institutions.