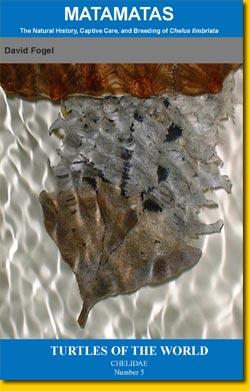 The Matamata is truly one of the world's most unusual turtles! This large South American species is a wonder to observe . . . its primarily sedentary lifestyle and bizarre appearance make it ideal for a fascinating display.

The Matamata (Chelus fimbriatus) inhabits northern and central South America, and has long been a favorite of turtle hobbyists, as well as zoological institutions. Its bizarre appearance and unique ability to "suck" or "vacuum" fish into its huge mouth and throat with amazing accuracy and speed is one of the best displays in the herp world.

Over the past several decades, David Fogel has maintained dozens of species of chelonians. Although subtle, he believes the Matamata may be the most intelligent, perceptive, and aware of its surroundings. With the exception of its incredible, explosive feeding ability, one may erroneously assume the Matamata is sluggish, and unperceptive. In reality, this species seems to constantly be on alert. He obtained his first two Matamata as hatchlings in 1979, and immediately became an admirer of the species.

This book in the TURTLES OF THE WORLD series will present readers with a look at the life of this amazing turtle in nature and in captivity. Enclosure designs, filtration details, and specific captive care requirements are included